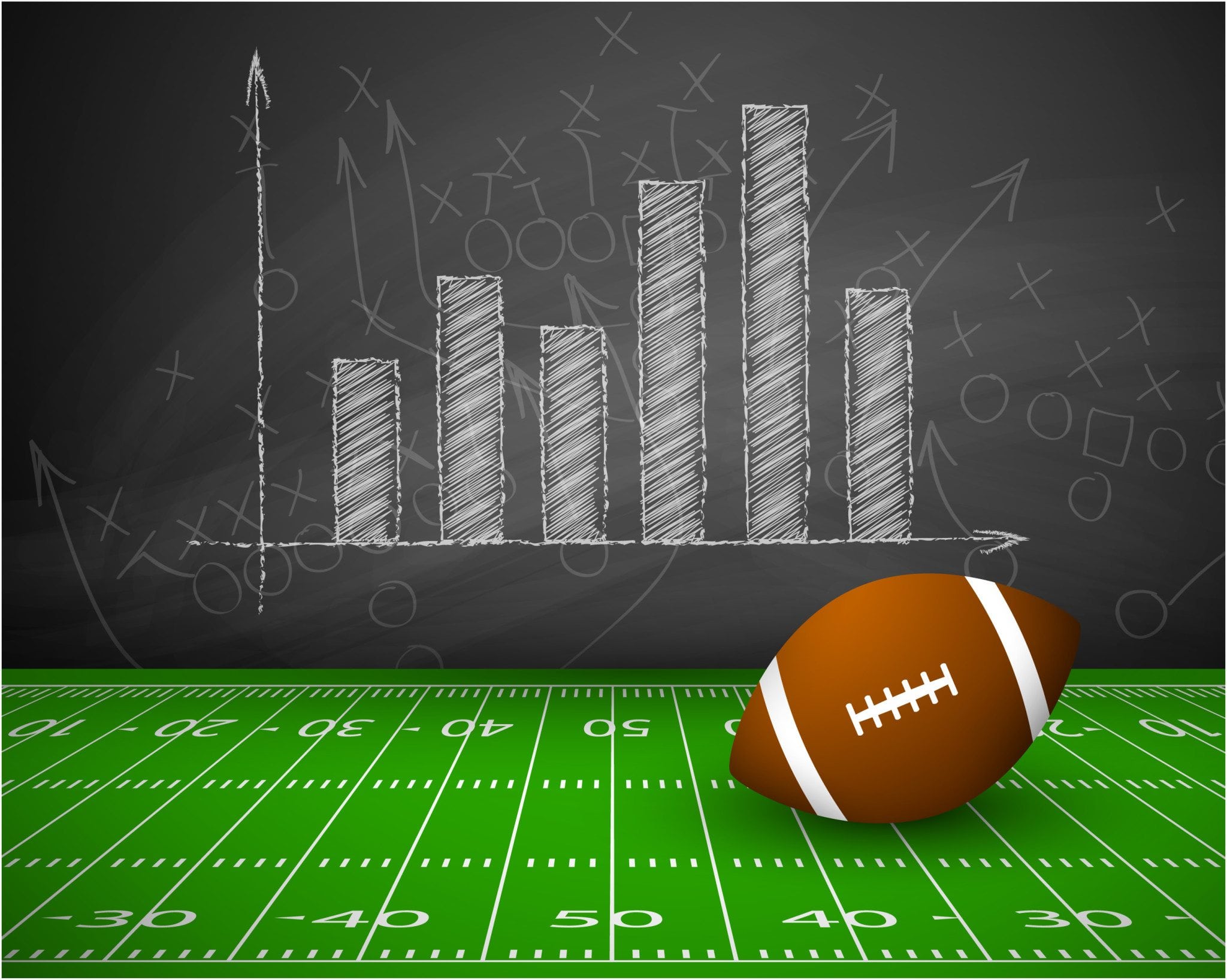 As athletes transition from high school to college, significant cognitive demands are placed upon them. They must learn more sophisticated concepts at deep depths. Their football knowledge base undergoes significant quantitative and qualitative changes. Their mental representations of the various concepts are challenged, refined and further developed.

This post applies Patricia Alexander’s Model of Domain Learning (MDL) (Alexander, pp. , 2003) to the sport of football. (The MDL was developed for learning in academic domains.) The MDL provides a useful framework for envisioning college football players’ cognitive evolution. According to the model, learners progress along the following continuum: acclimation to competence to proficiency/expertise.

The first resource football players receive upon arriving on campus is a book known as the playbook. The playbook is the foundational source of knowledge for everything that they will do that year and often in subsequent years. While it is not a literature book or a textbook, it functions in much the same way as these resources, and mastering it requires the same cognitive skills that are needed to master textbooks.

In this initial stage, learners orient themselves to new information. New college football players typically operate within a surface learning approach and apply memorization skills in their initial interactions with the material (Laird, pp. , 2008). This produces a fragile state of learning in which they recognize the terminology being used during position meetings and may be able to identify it on film and in live sessions, but they are unable to understand why actions should/should not be taken or conceptually how to execute them. They may often confuse and conflate their knowledge, dithering between knowing and uncertainty. Athletes in this phase frustrate coaches, as they are prone to mental errors. Like students in the acclimation phase, their knowledge is fragile and fleeting; they are prone to lapses in critical situations.

This type of knowledge is typified by students who have a grasp of the foundational principles within a domain. At this stage, learners use a “mix of surface-level and deep-processing strategies” (Alexander, pp. , 2003, p.12) and will not need to rely upon prompts to trigger learned information. The competent football player has a working knowledge of the various formations, concepts, schemes, etc., that are applicable to the position he plays. He may possess a general understanding of how his position’s tasks and outcomes coordinate with surrounding positions. He can apply his knowledge to different play calls, formations and situations, adjusting his role when needed. At this level, the player exhibits solid domain knowledge (Alexander, pp. , 2003), which is the breadth of available plays and formations and the variations plays that can be called within respective formations. The competent athlete also has considerable depth of knowledge about the plays, formations and mutations, which is known as topic knowledge, according to the MLD.

The most distinguishing factor between acclimated and competent players is that the latter grasps the larger conceptual ideas upon which the discrete plays and formations exist. They “get it.” They no longer need to devote energy to the “whats” of the game because they understand the “whys” of the game. If they are on offense, they know why a specific run play or pass route is being called, given the conditions (e.g., down, distance, time, etc.). Defensive players grasp why a formation or a blitz is ideal, given the conditions. This increase in depth enables them to invest their cognitive and metacognitive skills in developing and refining their “how.” They devote their energy to playing the game better – faster, more conscientiously and with increased intentionality and precision.

Competent players’ mental representations (or the mental canvases upon which they imagine the plays before physically executing them) of the game are much deeper, yet simple and accessible. Their deep conceptual knowledge of the fewer, yet central principles of their defensive or offensive philosophy enables them to play faster. Coaches covet the faster play, but they rarely attribute it to a change in their players’ knowledge base. I believe players’ increased efficiency– their ability to do more in fewer movements, anticipate actions, etc. – is correlated to their increased depth in thinking, which leads to the final stage of the MDL.

Proficient/expert learners’ knowledge bases are both broad and deep. Yet the most distinctive aspect of their learning is their ability to contribute new knowledge to the domain (Alexander, pp. , 2003). Cognitively proficient athletes are extremely rare. However, I believe we can produce many more athletes who fit this bill. The experts are usually the coordinators and head coaches. (Great coaches can create systems in which competent players can appear proficient, but closer analysis reveals that the coach is the real thinker behind the scenes.) Proficient athletes possess all the cognitive abilities of competent players; however, they know the concepts at such depth that they can analyze the various factors that affect each play, make judgments and create, in the moment, when needed. Athletes at this level have a rare ability to conceptualize, to mentally visualize their offensive or defensive concepts, schemes, formations and plays along with the same factors of their opponents, and within the context of the situational conditions.

The most iconic example of the type of high-level thinking described above is that of NFL quarterback Peyton Manning. Consider that within the seconds before the ball is snapped, he has taken into account the situational conditions (score, down, distance, time, personnel), selected a play based upon these conditions, analyzed what the defense wants to do, factored in the personnel package of his opponents, compared his analysis with what he’s attempting to get his team to do, and decided whether or not there are more suitable plays in which to audible, all the while deploying numerous hand gestures and barking out various sounds – some of which are meaningful while others are decoys – and ensuring that the other ten offensive players are set, while remaining mindful of the play clock that is working against him. This is what NFL players and coaches mean when they say that Peyton beats his opponents before the play starts. Other quarterbacks who fail to progress beyond competence see the same defensive formations as Peyton, but they evaluate the play as it unfolds. Peyton completes the greater share of his evaluation before the ball is even snapped.

Manning, as well as the three to four truly elite NFL quarterbacks, do most of their mental work during film study. The process of studying film requires the same cognitive functions as studying in general.  It’s a delight to see football analyst increasingly attributing successful play to athlete’s mental abilities, commonly referred to as “football IQ,” than just their physical skills. Likewise, proficient students hone their skills during study. When done properly, the very act of studying is an exercise in critical thinking.

In the fall of 2011, I launched a study hall program for student-athletes at Lenoir-Rhyne University, which plays at the NCAA Division II level. I applied my athletic iteration of the MDL to the athletic teams in the workshop framework depicted below.

The results were astounding as the student-athlete GPA immediately skyrocketed to the top of the conference. Since the start of the study hall program, Lenoir-Rhyne University’s student-athletes have maintained the South Atlantic Conference’s top spot for academic performance for four consecutive years.

Perhaps more impressive is that during the second year the student-athlete GPA surpassed the general student body GPA. Faculty, who frequently expressed frustrations over student-athletes’ low-performance, began raving about them being in their class. It was a complete turn-around that has been sustained for four years.

Additionally, the athletic teams, including football, men’s basketball and men’s soccer — some of the more intervention-resistant programs — have been experiencing record graduation rates, and the ineligibility rates have dramatically decreased.

Currently, I’m installing a variation of the model with a couple of institutions this year.  The initial results have been very promising. Student-athletes grades are showing significant signs of improvement and the players are seeing an impact on their athletic performance as well.

In collegiate sports, students must learn a new language and new concepts that incrementally build upon each other. College athletes understand that things they learned in the first week of practice are still relevant in the eighth week.

Before athletes can successfully play their sport, they must be properly conditioned. Conditioning gets players’ bodies in shape so they can do what is required. Conditioning doesn’t win games; it creates the environment for players to perform the actions that win games.

Likewise, academic conditioning involves a state of mental readiness and preparedness that situates students for rigorous learning. This workshop focuses on the conditioning factors that position students to perform well in the classroom.

Practices often consist of situational periods. These are segments in which coaches attempt to simulate game conditions. The idea is that by “playing the game” during practice, players will be prepared for the various situations that unfold during actual games.

When players have practiced properly, preparing for the game is a matter of mental repetitions.

This workshop shows students how to convert all of the practice (studying) they’ve been doing into game-specific (test and task) preparations. Proper preparation is the best antidote to test anxiety, so much so that well-prepped students experience anticipation rather than apprehension prior to testing.

If one has the fundamentals down, is properly conditioned, practices well, and has prepared for the game correctly, then the only thing left is to play the game.

This same sequence holds true in the classroom. This workshop focuses on the products of students’ learning, emphasizing quality control methods that increase their chances of performing well.

Whether the team wins the game or loses, they must improve. The next competitor will incorporate observations from their previous game into the next competition. Therefore to be successful, the team must learn from their past experiences and get better.

This workshop gives students methods to appropriately examine and assess their work so they can go beyond improving their answers to enhancing the conditions of sound thinking that produce good answers.

This model is still a work in progress, so I’d love to hear your comments, feedback and questions. Please share your thoughts below.