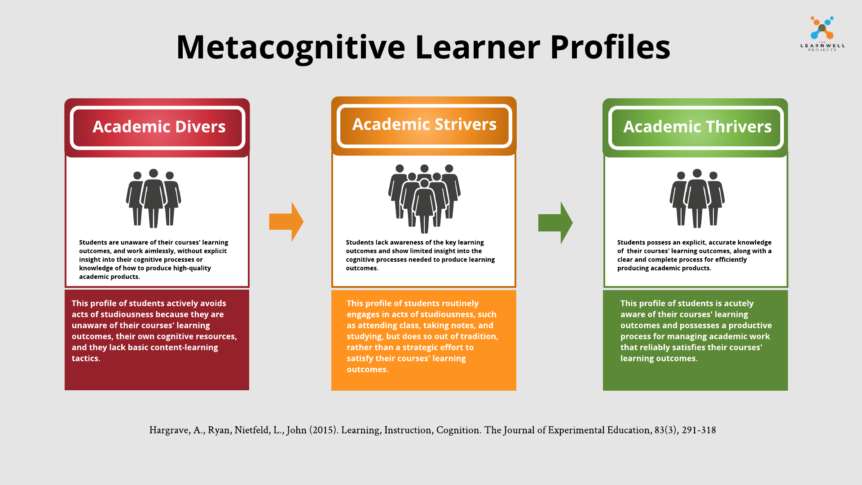 Going to college is no trivial matter, but succeeding in college is an entirely different challenge. Why does college make some students but break others? This article shares an effective strategy you can use to transform students’ struggles into successes.

In a previous post, I briefly introduced three metacognitive profiles of learners: Academic Divers, Academic Strivers, and Academic Thrivers. You can read up on this article here.

Who are the Divers?

Academic Divers is a term I use to describe the group of students who possess both low test scores and low levels of academic motivation. These students make up a relatively small percentage of students on each campus. But they are recipients of the largest share of academic support resources.

When I consult with an institution, Divers are usually the population they want to address. I quickly realize that my first task is to help them distinguish their Divers from their Strivers.

Practically every student struggles with adjusting to the increased academic complexity of higher education. But Divers stick out like sore thumbs, most notably because they seem unaffected by their low marks. It’s tempting to conclude that Divers don’t care about their academic performance. Perhaps a recount of my experience with Sean will shed some light on the complexity of Divers’ situations.

From the moment Sean stepped foot on Lenoir-Rhyne University’s campus, he was regarded as a star on the basketball court. He earned the starting point guard role as a freshman and proceeded to dazzle spectators with his command, control and competitiveness.

But Sean had a problem. He was awful in the classroom. Sean followed a pattern: He would start out attending classes, but his attendance would taper off as the semester went on. This pattern kept him in jeopardy of academic probation.

Because I directed L-R’s learning center at that time, John Lentz, the head men’s basketball coach, asked me to intervene with his young player. Sean and I met in my office about five times during the next two weeks.

Sean’s initial dismissive attitude tempted me to label him as a “dumb jock.” Doing so would have allowed me to discount his experience and reserve my assistance for “more deserving” students. But as I got to know Sean, I realized that hiding behind the dumb jock façade was an Academic Diver who craved help.

Academic work is highly emotional labor. As students study and prepare, fear unmercifully and relentlessly assaults them. Sometimes the fear manifests as self-doubt. Other times it masks itself as uncertainty and despair. Sean knew how to confront fear on the court, but fear was a bully in the classroom.

What was Sean afraid of?

The gap between what he knew and what he needed to know was far too wide. So, as classes progressed, he felt like he knew less and less. When his peers were nodding their heads in agreement with the professor during class, Sean was lost and confused.

Because many Academic Divers don’t talk about or otherwise overtly display their anxiety, it’s surprising to learn they are fearful learners. Sean hid his fear quite well under a disguise of sports bravado. And it was a great costume. No one perceived that the guy who was known for being fearless on the court was fearful in the classroom.

However, Sean eventually confessed that he hated academic work because it made him feel stupid. He expressed that studying never resulted in success. He said his lack of success in school drove him to put more effort into basketball, because playing ball made him feel good about himself.

In a Harvard Business Review article entitled The Power of Small Wins, Drs. Teresa Amabile and Steven J. Kramer share that consistent progress toward a goal is a core driver of knowledge work. Their research suggests that “making progress in meaningful work” is the single most important factor in boosting our emotions, maintaining our motivation and sustaining healthy perceptions during knowledge work.

Sean was experiencing the opposite of the progress principle. Like Drivers tend to do, Sean’s way of studying did not result in progress. It resulted in frustration and failure.

I used the fartlek method to build Sean’s academic endurance and expand his capacity to do academic work.

The Fartlek Method of Academic Work

If you’ve ever trained for a long-distance run, fartleks were likely part of your training regimen. I learned the benefits of fartleks as a high school football player.

A fartlek is a continuous running method that consists of alternating endurance and speed. The magic of the method is that the runner has to focus on intense running only for a relatively short distance. Once the distance is completed, the runner feels a sense of accomplishment and is motivated enough to complete the next sprint. Soon, motivation gives way to momentum.

As the runner completes more intervals, he becomes faster over longer distances. Fartleks have a history of building running endurance over time. The premise behind them can be applied to Divers to create academic endurance by building students’ motivation “muscles.” A series of small, manageable academic wins can lead to big victories.

Below is an illustration of Sean’s emotional map before and after he began using the fartlek model. According to the progress principle, “the more frequently people experience that sense of progress, the more likely they are to be creatively productive in the long run.”

This post focused on the affective element of academic work. In the next post, I’ll present a simple cognitive tactic that complements the farklet model. If you want to help Divers, then it’s a must read.